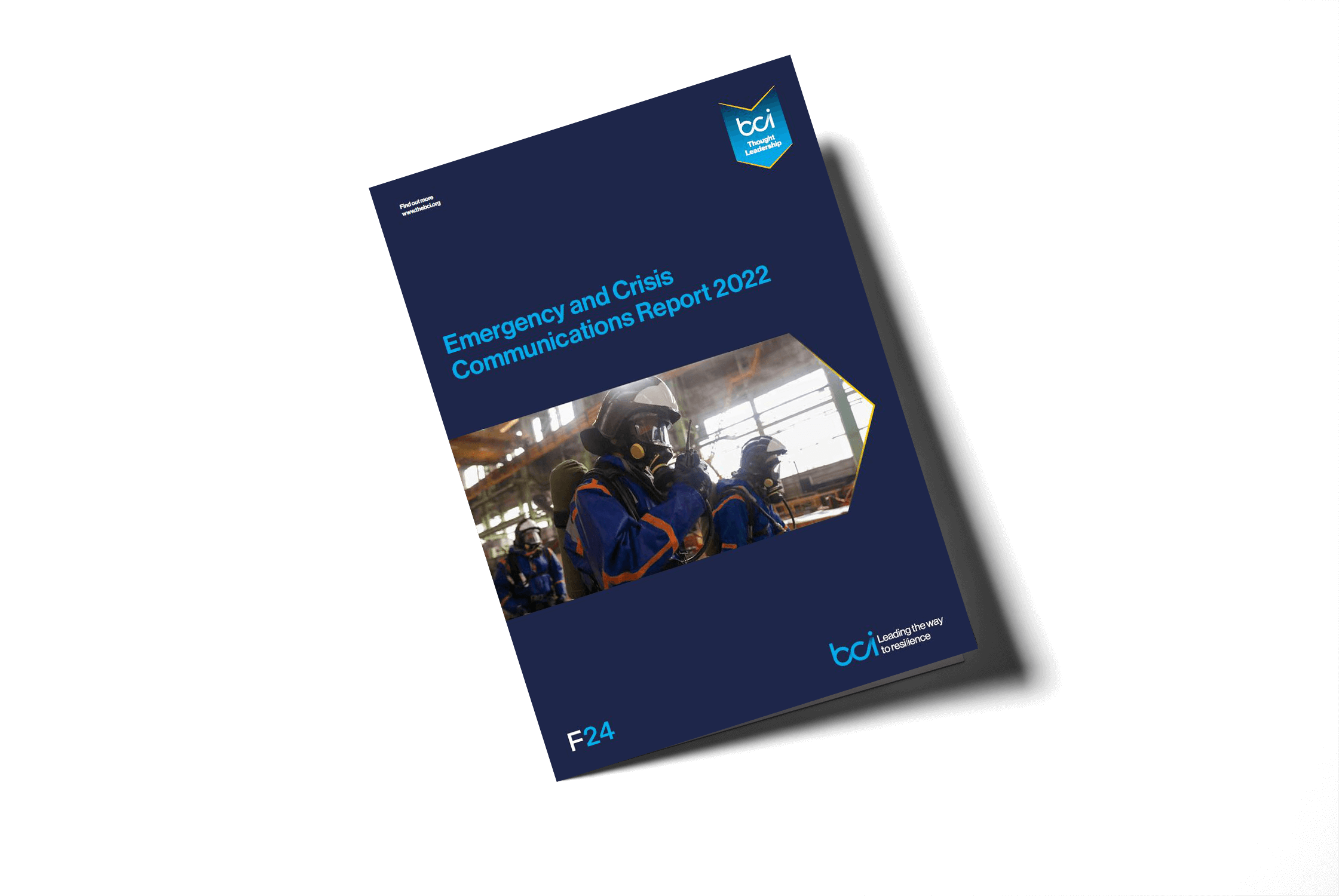 Reading, UK, 23 February 2022
The BCI has released this year’s Emergency & Crisis Communications Report, sponsored by F24. This report looks at how organizations are choosing to communicate in emergency situations, as well as the evolving role of technology in this field and what businesses are looking for in the communication tools of the future.

The surge in remote working throughout the pandemic has resulted in the usage of software-as-a-service (SaaS) solutions seeing a sharp rise over the past few years, as organizations ensured that  emergency communications systems could be accessed across multiple devices in remote environments. While the increase in SaaS usage has only marginally increased this year (up to 74.2% from 74.1% in 2021), there is still an expectation that businesses will invest in new technology to enhance their own range of in-house solutions this year.

Indeed, the report has found that organizations are now investing more in specialist emergency and crisis management tools to support remote business operations. This follows the trend of last year’s report, which saw a decline in free-to-use messaging applications, such as WhatsApp, as a tool for emergency communication. Organizations are finding that some tools, such as Microsoft Teams and Zoom, have been pushed to their use limit and are now looking for added functionality to match the unique requirements of their business. The sharpest increase for this has been in small- to mid-sized businesses, those which had previously viewed the investment as not worthwhile.

One particular tool is growing in importance even more, with organizations reporting the mobile phone as the most used device in a crisis. The functionality of SaaS applications on mobile phones has been a factor in the mobile phone becoming the dominant tool for an emergency response.

Not only is remote working influencing the overall trends, but a return to the office and an increase in hybrid working has also resulted in on-site technology (such as walkie-talkies/radios) beginning to record a comeback for emergency communications this year.

The ‘golden hour’ target for organizations to respond to a crisis and execute their emergency communications plan is still in play for more than 80% of respondents. In fact, the ‘golden five minutes’ is now a valid option for just under a quarter. However, the number of organizations who can activate their plan within five minutes has decreased from that seen last year. Alongside different survey demographics, this is likely a result of senior management requiring events to be analyzed more closely before action is taken, as well as a decline in incidents which need a response within 30 minutes..

“We have seen the emergency and crisis communication market evolve dramatically during COVID: there was a spike in the take-up of emergency communication tools and software in 2020 as organizations grappled to address communication issues in the early part of the pandemic. A rise in activations of emergency communication plans as a result of COVID ensured staff gained familiarity with process and procedures, and management pushed investment for new communication technologies. However, 2021 saw a slight cooling in the uptake of emergency and crisis communication tools after the burst of activity in 2020. What we are noting is organizations becoming far more discerning when choosing solutions: they are seeking solutions which still work during communication blackouts, demanding tools which have the facility for team collaboration during a crisis and requesting extra security from their solutions. Last year was all also all about speed of communication, with organizations chasing to get plans activated within five minutes. This year, organizations have learnt the value of trading speed over insight, with response times going out towards 30 minutes as management become more demanding of information in the early stages of an incident.”

“Based on intense experiences arising from the pandemic, we now have to act in foresight and shape our new ways of working when dealing with crisis situations – and this is precisely where the research of the report supports heavily. One key insight this years report shows clearly is that, although business communication tools are valuable for the everyday communication, they are not a convincing solution for emergency & crisis communications. Encouragingly, this year’s report once again highlights those organisations using a dedicated Software-as-a-Service solution for emergency communication are much more satisfied. Therefore, the numbers repeatedly underline that an investment in a specialist solution supports organisations significantly in creating resilient businesses.”

Do you have any questions? We are happy to help you.

Get in touch with F24

Founded in 1994 with the aim of promoting a more resilient world, the Business Continuity Institute (BCI) has established itself as the world’s leading Institute for business continuity and resilience. The BCI has become the membership and certifying organization of choice for business continuity and resilience professionals globally with over 9,000 members in more than 100 countries, working in an estimated 3,000 organizations in the private, public and third sectors.

The vast experience of the Institute’s broad membership and partner network is built into its world class education, continuing professional development and networking activities. Every year, more than 1,500 people choose BCI training, with options ranging from short awareness raising tools to a full academic qualification, available online and in a classroom. The Institute stands for excellence in the business continuity and resilience profession and its globally recognised certified grades provide assurance of technical and professional competency. The BCI offers a wide range of resources for professionals seeking to raise their organization’s level of resilience, and its extensive thought leadership and research programme helps drive the industry forward. With approximately 120 Partners worldwide, the BCI Partnership offers organizations the opportunity to work with the BCI in promoting best practice in business continuity and resilience.

The BCI welcomes everyone with an interest in building resilient organizations from newcomers, experienced professionals, and organizations. Further information about the BCI is available at

More About The BCI

F24 is the leading Software-as-a-Service (SaaS) provider for incident and crisis management, emergency notification and business communications in Europe. The highly innovative F24 solutions for alerting and crisis management help companies and organisations around the world with efficiently and successfully managing incidents, emergencies and crises. F24 also offers solutions for high-volume communication of critical or confidential content in the corporate environment. More than 3,000 customers worldwide rely on F24’s solutions to manage their communication needs, as part of their day-to-day communication of critical or confidential content, or in the event of a crisis.

More About Our Products

Would you like to find out more about current events at F24? Read our press releases!

We keep You up to date.

Would you like to receive the latest press releases directly from us?
Register now to join the F24 press distribution list.